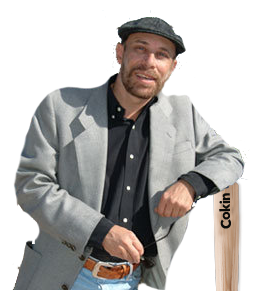 They call him “Smokin’ Dave Cokin,” a longtime Las Vegas sports handicapper, radio and TV personality, a sports loving, media mogul who continues to make history as one of the nation’s top sports gaming analysts. Dave is an industry insider, knowing the stats and stars better than anyone while understanding immediately the dynamics of line movement on any contest. Is it public overreaction? A bad number? An injury? A bad on-field matchup? Or a bad off the field coaching mismatch? Dave knows right away, which helps him to play or pass.

Dave is a featured columnist in national publications, such as the Sports Betting Guide and the Jim Feist Football Annuals, and is regularly in demand as a gaming insider on sports talk shows across the country. He’s been a featured panelist on the longest running sports handicapping show, “Proline”, since 1993 on USA Network and the web.

His trademark chapeau has sparked nicknames for him (“The Cat in the Hat”) and his coveted plays (“Under the Hat release”). Dave was voted as the 2004 and 2006 Nevada Sportscaster of the Year by the National Sportswriters and Sportscasters Association. No wonder Dave Cokin was tagged by noted author Martin Mendelsohn as the “Ted Williams of the sports service industry,” a moniker that Dave, a longtime Red Sox fan who grew up in Rhode Island, relishes. The only difference is that Dave occasionally tips his cap!