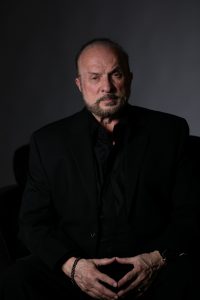 For the third straight year LeBron James and the Cavaliers battle Steph Curry and the Golden State Warriors in the NBA Finals. If you had doubts about star power being the difference in the NBA Playoffs you can forget it. Both teams are loaded with stars leaving everyone else far behind….again.  Golden State is a 7-point home favorite for Game 1, the total at 226.

Two years ago Golden State exploded with a historical season, tops in the NBA in field goal shooting and three-point shooting, plus No. 1 in FG defense allowing just 42% shooting on the way to topping the depleted Cavs in six games, coming back from a 2-1 deficit. Last year the Warriors were record-setting again, but it was the amazing Cavs who came back from a 3-1 Finals deficit to win Cleveland’s first title since the 1964 Browns (yes, the Browns have one quite a few titles, just not lately).   Cleveland is back for an encore, with a better team than the one that lost in 2015, with their Big 3 of LeBron, Kyrie Irving and Kevin Love healthy. King James is making his seventh consecutive NBA Finals appearance, and fourth with Cleveland (2007, ’15, ’16). 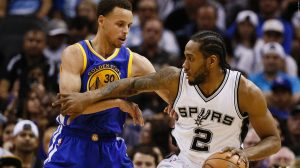 Golden State is better, however, with the same core of stars (Curry, Thompson, Green) but they added superstar Kevin Durant in the offseason to create one of the strongest teams in the NBA has ever seen. Durant still has to earn his first ring, of course, but this is one incredibly talent group. The Warriors led the NBA in scoring and field goal shooting defense, as well as three-point defense. Few teams in history have ever come close to that.

For the record the two teams split their regular season meetings, with Cleveland winning 109-108 on Christmas Day and the Warriors winning at home, 126.91. The NBA has gone back and forth of late crowning champs between veteran teams and young ones. This NBA Finals pits two largely veteran teams with stars in their prime. 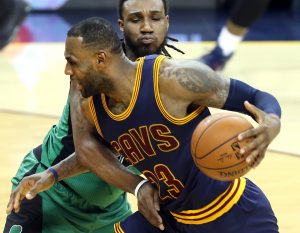 Five years ago it was supposed to be the time the kids stepped up in Oklahoma City. OKC with Durant came close, winning Game 1 of the Finals before Miami and the more experienced James won four in a row. The previous year a younger Miami team came close, carving out a 2-1 series lead before collapsing, as it was those old fogies in Dallas who came away with the title – another veteran team winning the whole thing.

The Spurs won it all three years ago with a great mixture of talented young players alongside their veteran troika. Overall, veteran NBA teams had been on a roll, with the Celtics winning it all in 2008, the Lakers in 2009-10, the Mavericks in 2012 out of nowhere, the Heat twice under LeBron, and the Spurs with Tim Duncan and Gregg Popovich. This year young teams from Boston, Toronto and Utah made the playoffs and knocked on the door. While the NBA is more of an athletic game, primed for young legs, the experience of the Mavericks certainly helped them five years ago, while the Celtics and Lakers had more veteran stars during their title runs.
Sometimes age can work against teams, breaking down from injuries. The Celtics and Lakers were veteran teams that clashed in the Finals in 2008 and 2010, but aging Boston broke down with injuries in 2010 and in runs shortly after that. Prior to that veteran teams like the Spurs, Pistons and 2006 Miami Heat won titles. 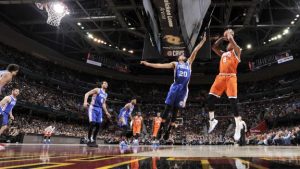 oints allowed for field goal shooting defense. Oklahoma City was tops in the West in FG shooting defense, while the Pacers were best in the NBA.
This shouldn’t surprise. Five years ago Miami was sixth in points allowed during the regular season, Dallas was 10th. East vs. West, Cleveland against Golden State. Will Steph Curry celebrate his second title? Or will we see LeBron hoist the trophy again? Let the games begin!