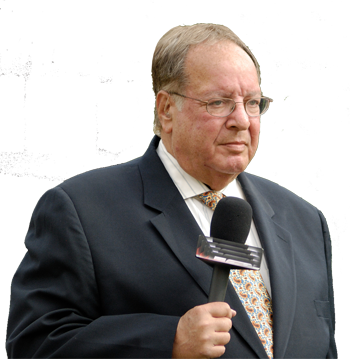 Hank Goldberg has been involved in sports media and the wagering industry since the 1970s. He was dubbed the “Greek’s Ghost” from 1974-77 when he wrote syndicated columns for Vegas handicapper Jimmy “the GreeK” Snyder. Those columns were read in newspapers and magazines all over the nation, examining sports and Vegas betting lines.

From 1978-92 he was a radio talk show host in Miami, Florida, on WIOD. He was also the Miami Dolphins color announcer on television, as well as working for ABC TV on horse racing’s Triple Crown shows. From 1983-92 he worked for WTVJ sports in Miami, a CBS affiliate.

Hank is most noted for his work on ESPN from 1993-2014 as a football reporter and analyst. He has been featured on NFL Countdown on Sportscenter analyzing and predicting games, as well as horse racing analyst and an ESPN radio host.

Hank is a horse racing expert, involved in Triple Crown Draw and Post Derby TV shows as a handicapper since 1996. He participated as a host or guest in 24 shows, including the Belmont and Breeders Cup.

In addition, Hank hosted a radio show on WQAM radio in Miami, Florida, from 1993-2009 including the “Jimmy Johnson Show.” The program was rated No. 2 in he 3-7 PM slot with men aged 25-54. he also worked on a dozen Sports Illustrated radio shows since 2006. Hank Goldberg knows sports and Vegas numbers inside and out!